The suspect arrested over the car-ramming attack against the "Freedom Convoy" protesters in Winnipeg, Canada is an Antifa member with a long history of far-left militantism in Manitoba. David Alexander Zegarac, 42, of Headingley, Man., allegedly sped off to try and escape after the attack on Feb. 4, 2022, which injured four people. He ran multiple lights and resisted arrest when he was finally caught around 40 minutes later.

Zegarac was the frontman of the antifa punk band Brat Attack until the record label dropped the group because of multiple accusations of sexual assault against Zegarac in 2015. One of the accusers said she was only 13 when he groomed her and raped her. [Link: https://web.archive.org/web/20150711070009/https://gaslight-retreat.tumblr.com/post/122738519912/trigger-warning]

Zegarac's music is extremely political, features violent themes and was popular with the local antifa anarchist punk scene in Manitoba and other parts of Canada. He performed in multiple other short-lived antifa bands as well. On Deviant Art, he posted antifa art under the username, "DaveyBrat." One drawing shows an antifa member in black bloc hurling a firebomb. Zegarac's YouTube channel features his music and performances. A song from seven years ago is called, "Bash the Fash" and the video features the Antifa black and red flag logo. [Link:

With the revelation of Zegarac's identity and the emergence of his deep roots in Canada's antifa punk scene, antifa supporters who know him are going into damage control. Winnipeg Punks, whose current avatar on Facebook is a crossed out "convoy," released a statement saying Zegerac was part of Antifa and Anti-Racist Action (another militant far-left, antifa group), but that he was a "poser" and was "despised." [Link: https://archive.is/RCOBI]

Zegarac has been charged with four counts of assault with a weapon, failing to stop at the scene of an accident and dangerous operation of a vehicle causing bodily harm. A Winnipeg police spokesman said in a news conference the day after the attack that they couldn't speak to the driver's motivations. 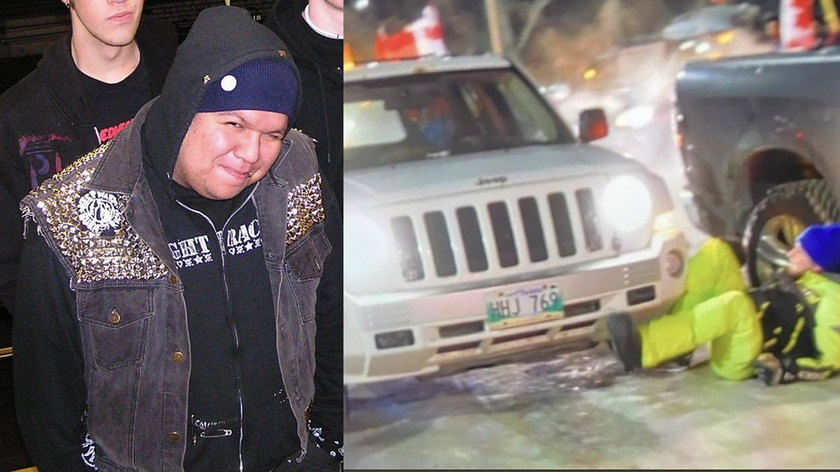 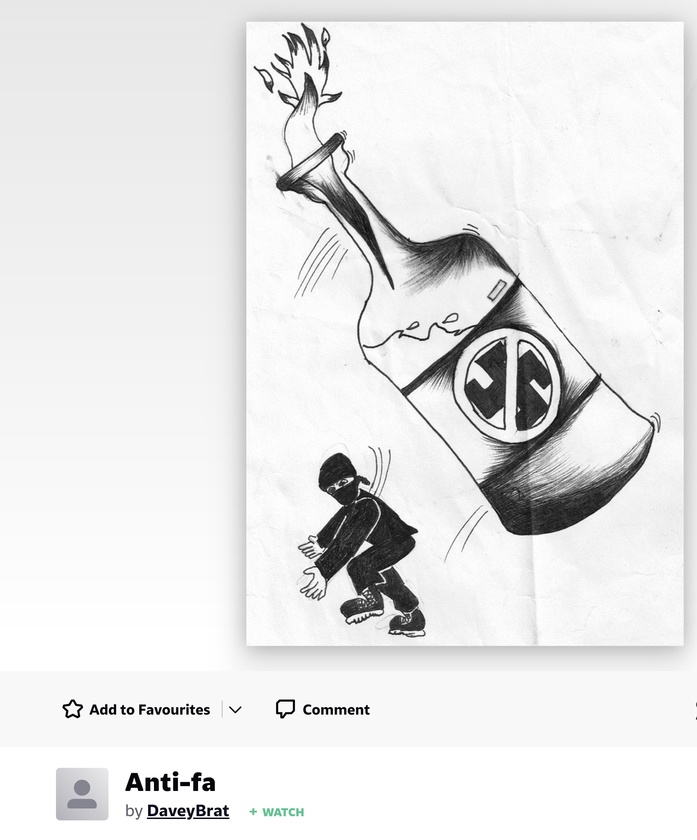 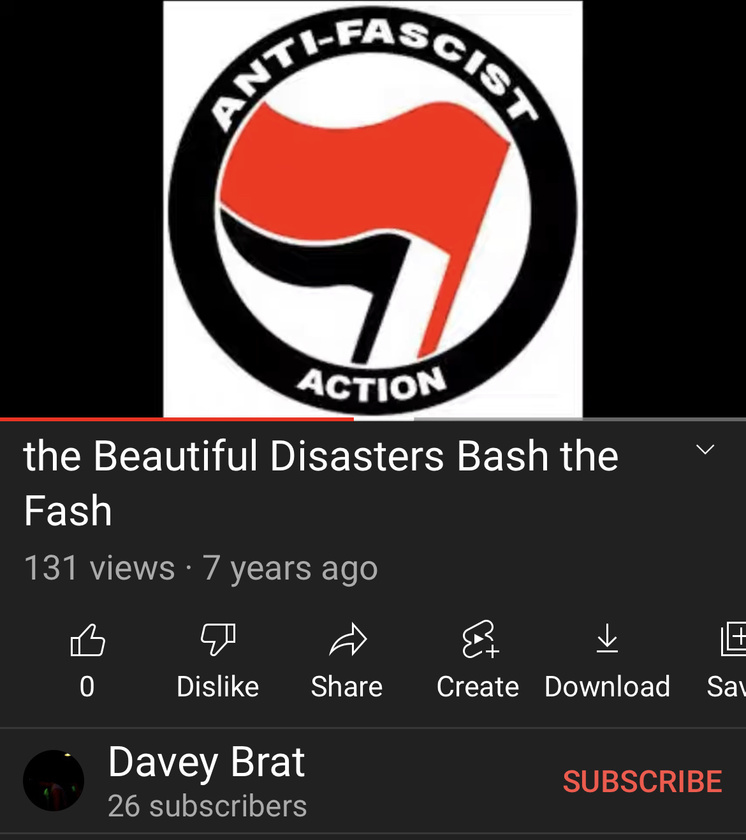 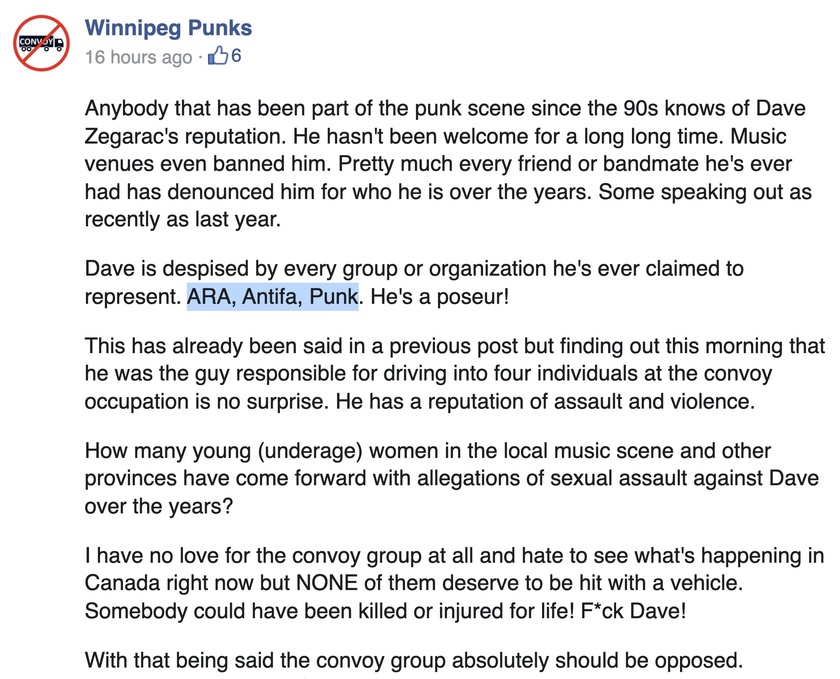 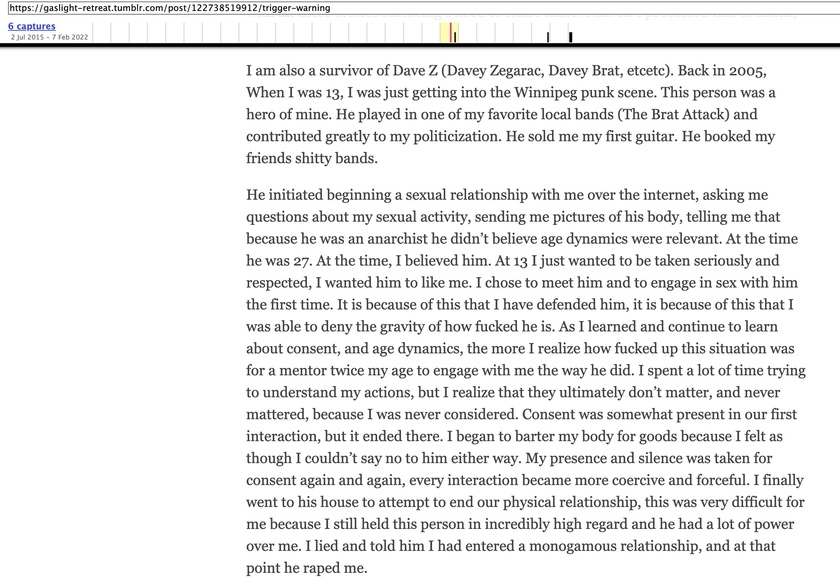 129
View All
8
Reply
Interested? Want to learn more about the community?
What else you may like…
Videos
Podcasts
Posts
Articles

November 27, 2022
Antifa call for 'month of attacks' as retaliation for World Cup capitalism

I was interviewed by Newsmax about an Antifa group in Portland, Ore. calling for a "month of attacks" after smashing up the Adidas North American headquarters. I also weigh in on the Colorado deadly gay club shooting by a nonbinary suspect.

This is episode 24 of Andy Ngo's Weekly Notice. It originally aired live on Sept. 8, 2022 on Gettr. You can watch "Weekly Notice" live every Thursday at 7 p.m. ET exclusively on my GETTR. Link: https://gettr.onelink.me/Epfq/zairm1qp. This is an ad-free show that requires your support. Join me at https://www.andy-ngo.com/donate.

PORTLAND — In Oregon v. John Colin Hacker, where Portland Antifa member John Hacker was charged with third-degree robbery of me over three and a half years earlier, he waived his right to remain silent to testify. During the trial on Nov,. 15, 2022, in which I also testified in person, Antifa threatened to find and kill me. Judge Eric L. Dahlin ruled that even though I was victimized and was "blameless," he could not find that Hacker was guilty of third-degree robbery. 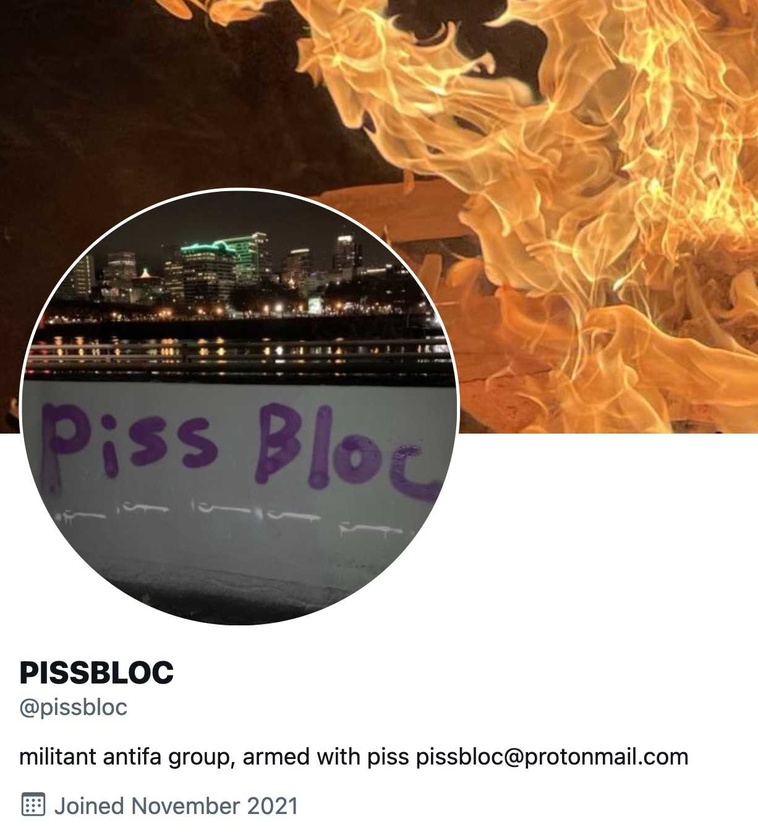 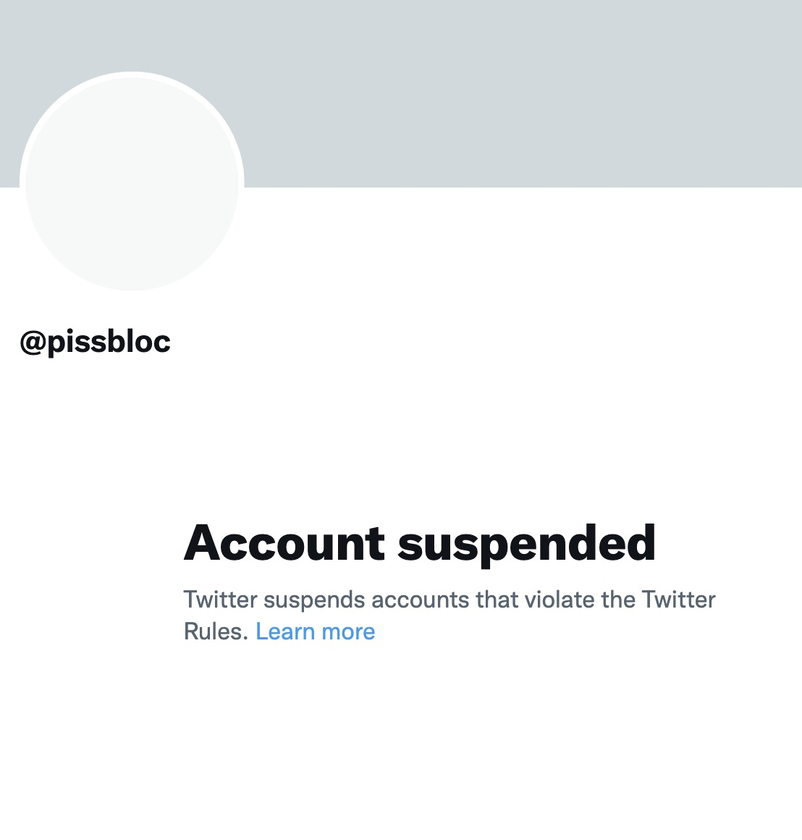 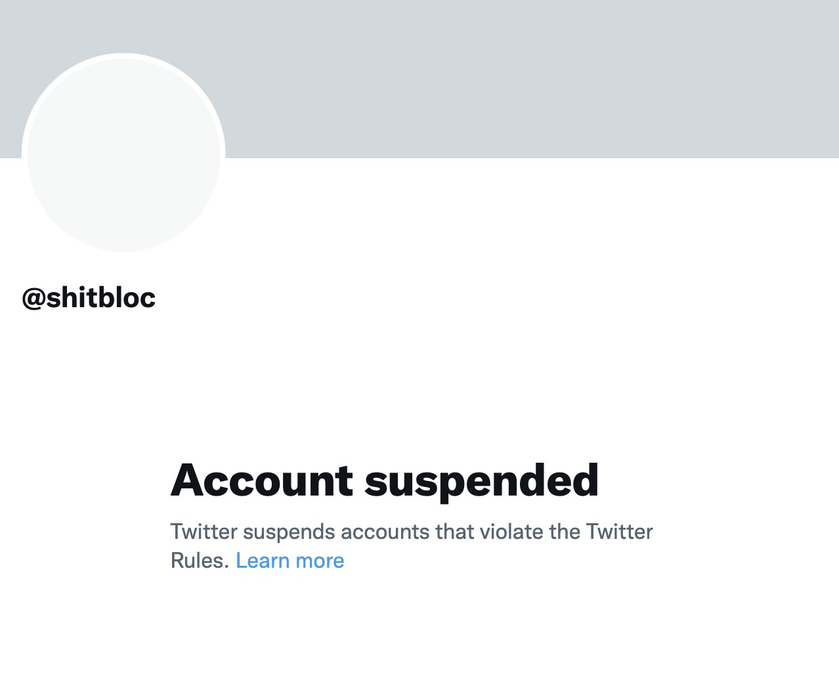 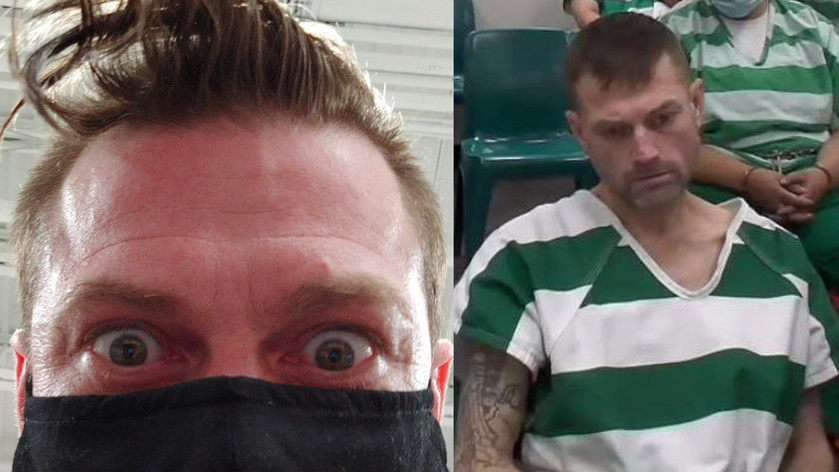 A 44-year-old Seattle-area man has been identified as the suspect in Friday's violent arson attack and bomb threat next to a Tesla property in Lynnwood, Wash. that led to an hours-long standoff finally ended by a SWAT team unit. The arson attack and bomb threat followed promises the same day by Twitter Antifa accounts to burn down Tesla properties as revenge against Elon Musk for suspending their accounts.

Michael Paul Hargett allegedly threatened a business owner with a screwdriver at a business next to a Tesla store on Nov. 25 before threatening responding police with a crowbar. According to the Lynnwood Police Department, Hargett said he was armed with a handgun. An attempt to tase the suspect failed. Police say he barricaded himself in a room and moved propane and acetylene tanks in position, threatening to blow up the area.

During the attack, Hargett allegedly smashed windows open so he could hurl projectiles at police. Once the suspect started a fire, a mobilized SWAT unit doused the flames with a fire hose before breaching the building by using a robot. Police evacuated the area during the stand off that lasted nearly five hours.

The incident came at a tense time for Tesla as earlier the same day, a prominent Portland Antifa account that organized multiple violent direct actions had called for attacks on Tesla properties.

"The fascist Elon Musk has chosen his side in history aligning with fascists and white supremacy so tonight we are calling for actions across the so-called 'US' at every local Tesla dealership," read the flyer shared by "@AshRedacted." The flyer listed Portland's Tesla store address and the account followed up with addresses of Tesla locations across the country. The account was later suspended following reporting by this journalist.

Though police have not stated a possible political motive for Friday's incident next to a Tesla store, Antifa accounts nonetheless praised the attack.

"Someone in Lynnwood, WA went to the Tesla service center last night and (allegedly) set it on fire only after (allegedly) threatening the pigs with a crowbar and getting tased. They had to call in swat. F—kin' legend," tweeted Rose City Antifa member, "@Redwood_PDX."

"You do not need to announce a target before hitting it. In fact you should explicitly not do that," wrote Portland Antifa account, "@dennisispeasant."

"If the goal is the immediate gains from an attack I shouldn’t know about it until after it happens and I should never know who did it...We are massively underpowered compared to our enemies and thus we must be f—ng sneaky."

"When I arrived I saw multiple streets blocked off and the SWAT team was on scene trying to negotiate with a man who barricaded himself into an auto body shop," Choe said. "With multiple reports of threats by Antifa and far-left activists against Tesla, especially in the Pacific Northwest, I asked if this situation had anything to do with that. The officer said at the time he couldn’t confirm or deny anything since it was too early."

At the bail hearing for the suspect on Monday afternoon in Snohomish County, the judge said Hargett has another open criminal case for burglary. State prosecutors requested bail be increased from $50,000 to $100,000, but that was denied by the judge. Hargett is still currently in the county jail. 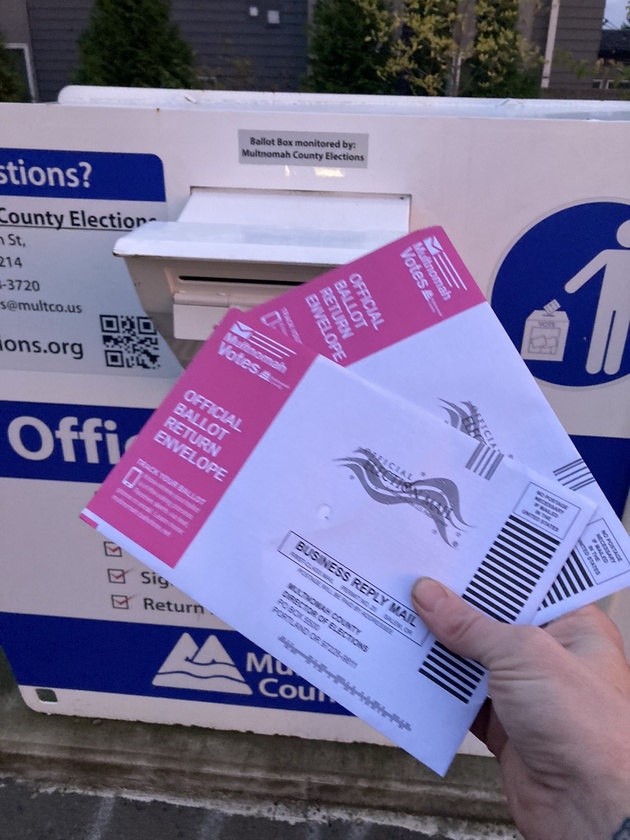 Antifa in Portland boast about voter fraud campaign across city
An Antifa account in Portland, Ore. regularly involved with planning riots is boasting about committing voter fraud by submitting multiple ballots every day across the city. He is encouraging his comrades to do the same. Oregon has universal mail-in voting.
Polling shows Republican gubernatorial candidate, Christine Drazan, is statistically tied against Democrat Tina Kotek in the deep blue state. The person behind the Antifa account is a member of violent extremist group, Rose City Antifa. He branded himself with a tattoo of the organization on his hand.
Kotek, who served as the speaker of the Oregon House of Representatives for nine years, expressed support for Antifa rioters in 2020 and her top staffer was arrested at a violent riot. She is seen as a continuation of outgoing governor Kate Brown.
In Portland, far-left city council incumbent Jo Ann Hardesty is polling double digits behind moderate Democrat Rene Gonzalez, sparking fury among Hardesty's militant leftist supporters.
Gonzalez's campaign office in downtown has been repeatedly smashed up in attacks believed to be tied to Antifa direct actions. He campaigns on a pro-public safety and law enforcement platform.
Read full Article
50
View All
5
Reply 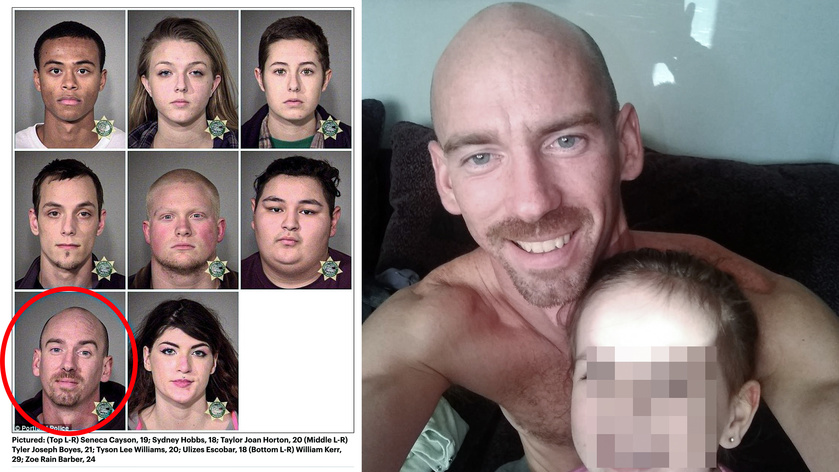 Kerr is a career criminal and convicted felon who was arrested at a violent Antifa riot in 2016 in downtown Portland after Donald Trump was announced as the presidential election winner against Hillary Clinton. For three days, Antifa and far-left rioters smashed up businesses and cars, and also started fires across the city. Kerr's second-degree disorderly conduct charge over the riot was quickly dropped by prosecutors.

It is unknown if he returned to rioting in 2020, but on his social media, he shared a video in August 2020 defending rioting and looting.

Kerr has a long criminal history in Oregon. In 2006, he was convicted of attempting to commit both a Class A and Class B felony over a violent robbery case. In March last year, he was arrested and charged with being a felon in possession of a firearm, attempted murder, unlawful use of a weapon, and other felony charges. The attempted murder and attempt to commit a Class A felony charges were dropped by the Multnomah County District Attorney's Office under DA Mike Schmidt while a judge dismissed the remaining felony charges.

In September, a protection order case against Kerr was opened for a minor.

This is a developing story. Gresham Police has been reached for comment.

Read full Article
52
View All
3
Reply
See More
Sign Up To NGOGO ZONE
Sign Up for free to see more from this community or subscribe to NGOGO ZONE for $5/month to support Andy Ngo for more interaction and exclusive content.
Login Signup
Available Now

Powered by Locals
About Community
NGOGO ZONE
29330 Members
Don’t have a Locals account yet? SIGN UP
I’m already a member Log in
Please keep this window open while your file is uploading...