On Monday evening, Robert Silverman, a reporter at The Daily Beast, sent me a list of inquiries and ended the message by saying he would give me one hour to respond. Silverman, a far-left journalist who has defended antifa and trolled me for several years, takes issue with the fact that I captured and published screenshots from the Wisconsin parade massacre suspect's Facebook accounts before they were deactivated.

Darrell Edward Brooks, a 39-year-old black man and the suspect arrested over the deadly Waukesha, Wis. car-ramming, has a long history of expressing support for Black Lives Matter causes and black nationalism. He also espoused hatred of whites and Jews.

Silverman wrote, "How big-time right-wing trolls Andy Ngo and Tim Pool tied the Waukesha killings to Black Lives Matter." You can read a non-paywall archive of the hit piece at [https://archive.md/Gp2ZX].

Last year, the Daily Beast published a report on Kyle Rittenhouse titled, "17-Year-Old ‘Blue Lives Matter’ Fanatic Charged With Murder at Kenosha Protest." The report looked at the teen's Facebook page, which featured innocuous support for law enforcement, and concluded that he was a crazed "fanatic."

Silverman/The Daily Beast said I wrongly tied Brooks to the Waukesha killings. No. Brooks' own posts did that—and the world wouldn't have known were it not for independent journalists and internet sleuths. 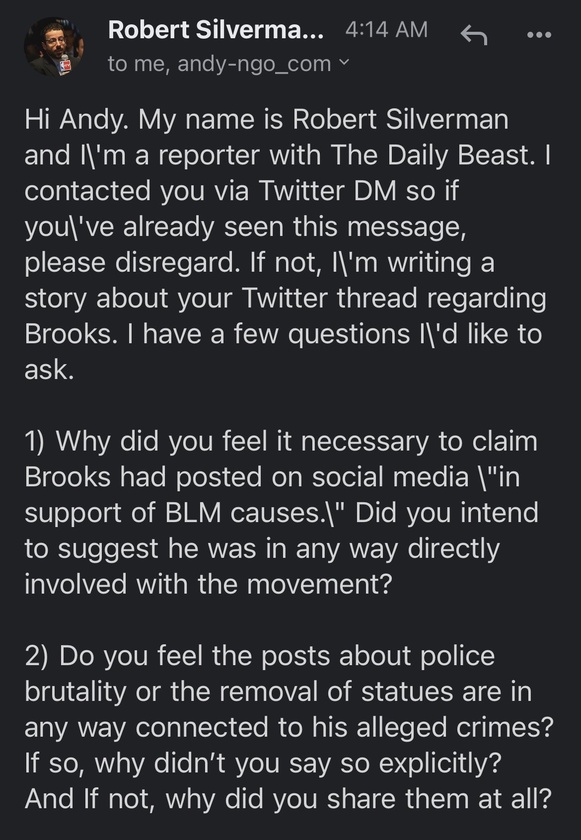 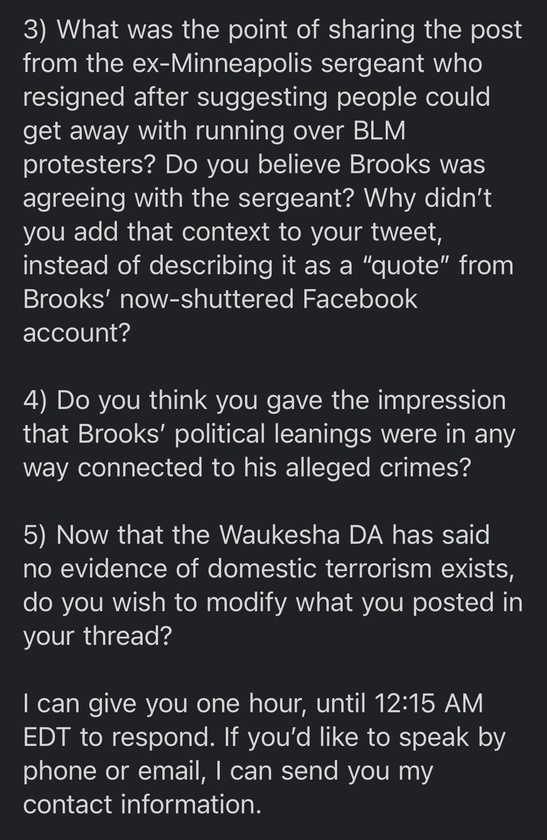 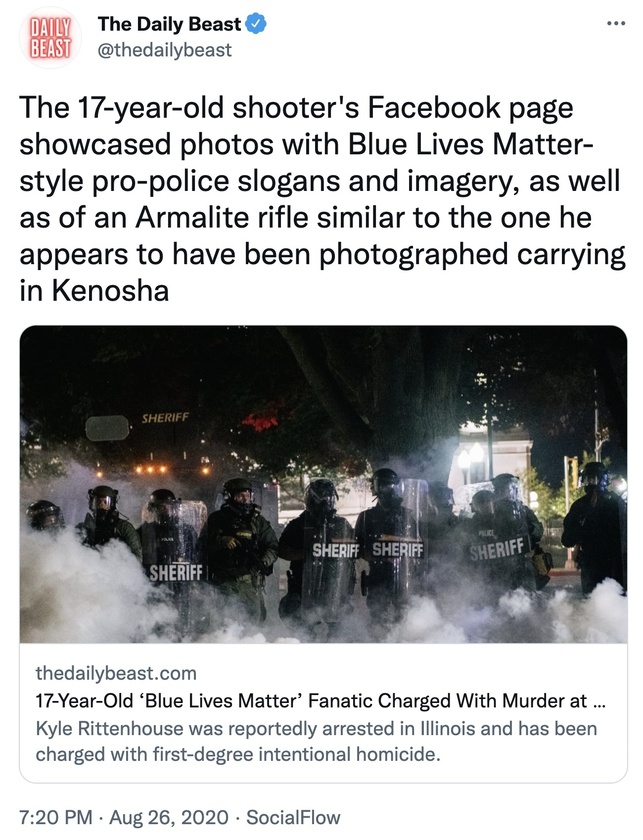 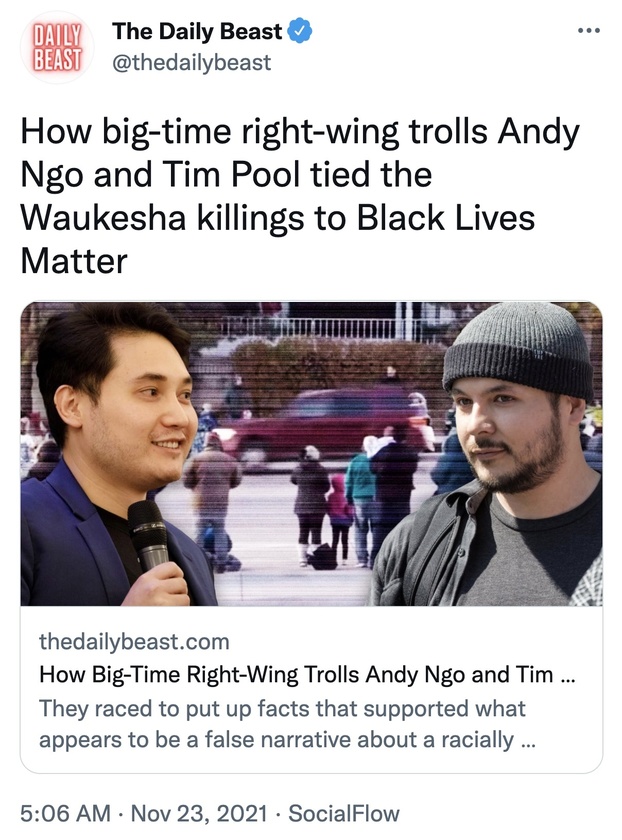 On Sebastian Gorka's Newsmax show, Andy Ngo discusses how federal investigative and prosecutorial agencies in the current U.S. administration have politicized the label, "domestic terrorist" to lump non-violent dissension in with violent extremism.

On Saturday night, three armed black men waited to ambush and rob an east Asian man returning home to his family from a work break in Philadelphia.

However, the Asian victim had a concealed carry pistol and shot two of them during the robbery, killing one. The third robber escaped unwounded. https://6abc.com/shooting-attempted-robbery-philadelphia-crime-city/11256875/

November 17, 2021
Watch: Press is gaslighting us about the violent BLM riots in Kenosha

On 11 Nov., 2021, Andy Ngo spoke with Buck Sexton about how the mainstream press is gaslighting the public about the nature of the "racial justice protests" in Kenosha, Wisc. in August 2020.

November 22, 2021
North Dakota man who attacked Republican US Senator's office with axe: ‘I am Antifa’

A North Dakota man who pleaded guilty over an axe attack on the office of Sen. John Hoeven, a Republican, is revealed to be part of antifa and has a history of extremist posts calling for deadly violence. Local Democrat leaders had donated to his defense. My new report co-written with Mia Cathell: https://thepostmillennial.com/north-dakota-man-axe-antifa?utm_campaign=64470 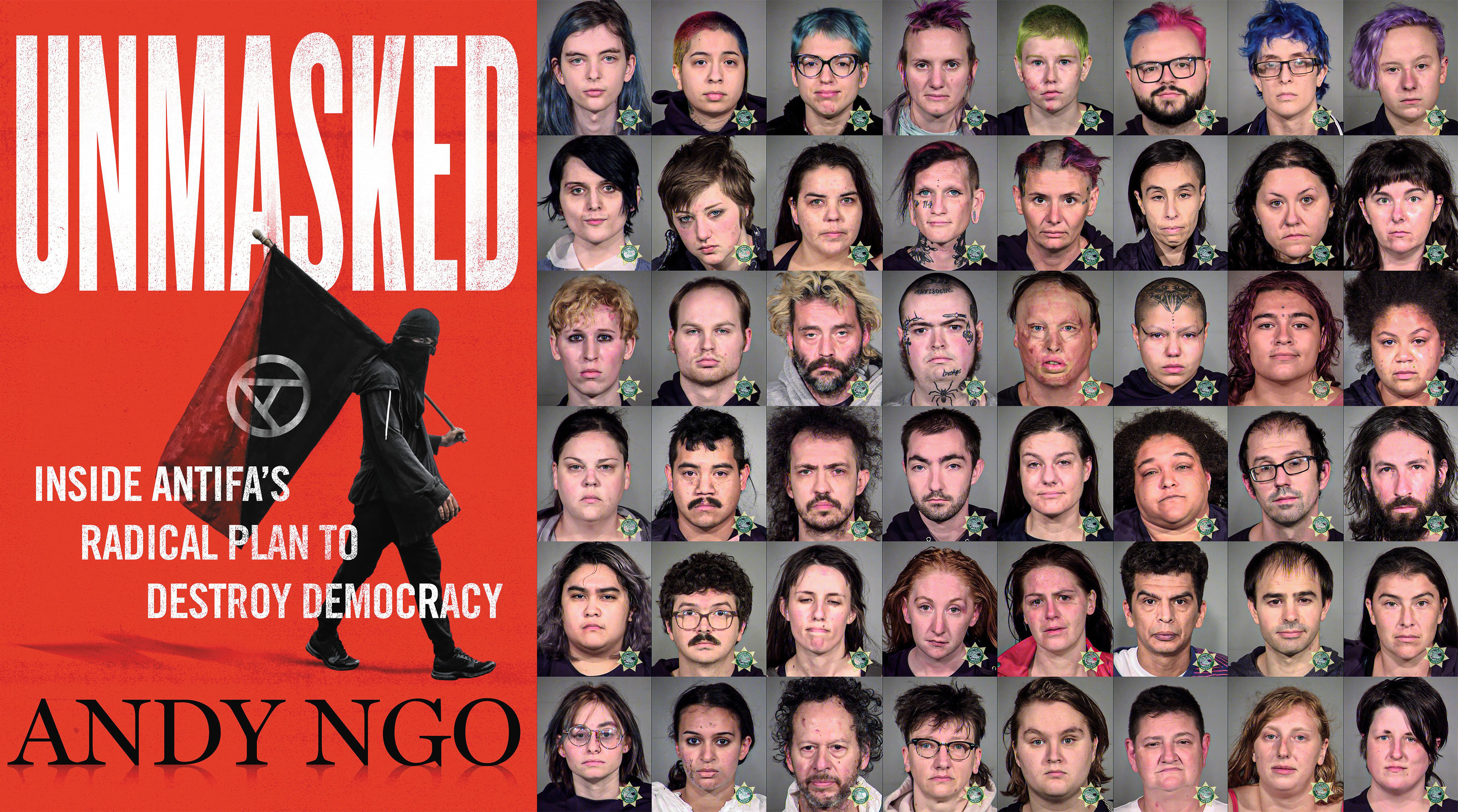 The director of the Canadian Institute of Indigenous Peoples’ Health has been suspended after it emerged she had pretended to be native for years. She now joins a long list of whites who have pretended to be people of color for social advantages. https://thepostmillennial.com/canadian-professor-who-claimed-to-be-indigenous-revealed-to-be-white?utm_campaign=64470

36
View All
3
Share Reply
See More
Sign Up To NGOGO ZONE
Sign Up for free to see more from this community or subscribe to NGOGO ZONE for $5/month to support Andy Ngo for more interaction and exclusive content.
Login Signup
Available Now

Powered by Locals
About Community
NGOGO ZONE
21219 Members
Don’t have a Locals account yet? SIGN UP
I’m already a member Log in
Please keep this window open while your file is uploading...